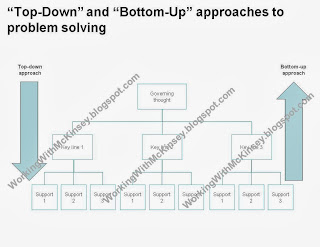 There are typically two primary ways to approach problem-solving - "top-down" and "bottom-up".  In this post I'll explain the differences as well as why the top-down approach is preferred by McKinsey bosses and interviewers...

McKinsey takes a structured approach to solving problems that includes breaking down larger issues into smaller pieces.  Those components of the problem are arranged into an "issue tree" with the biggest, overarching issues at the top.  Those are then supported by additional, increasingly specific, tactical, broader levels of supporting details.  I will devote a future post to these issue trees.

This means the problem solving begins at the "top" or with the highest-level, overarching question or theme, also known as the governing thought.  From there, the problem is broken down, identifying and developing the elements the next level down, with special focus on the critical or vital few drivers of impact.  Only after those key elements have been determined does the focus shift to tactical details.  The process is repeated, adding additional levels down the tree the tree is exhaustive.

This is the opposite of the top-down approach and, as the name implies, begins with the tactical, granular, specific details.  In this case, the work focuses on starting with a laundry list of issues, then organizing them into like groups, or "buckets".  Those buckets can often be grouped further, building levels up the tree, until, finally, the key drivers and governing thought are reached.

The simplest way to summarize the difference is this:  working at the top is considered strategic, while working at the bottom is tactical.  McKinsey consultants are encouraged to think strategically vs. tactically.  Here are some reasons why...

Why the Top-Down Approach is Preferred

There is a strong bias toward top-down thinking at McKinsey because it a) is logical, with a structured approach and b) starts by defining the most important questions and issues first.  The assumption is that if enough smart, experienced, hard-working consultants and clients align on the governing thought, the rest of the work that follows will be directionally correct.

Working top-down helps ensure that the questions asked and issues raised are completely exhaustive.  Less relevant ones might eventually get trimmed, but they will at least have been considered.  Top-down thinking also limits wasted work because only those topics deemed relevant and important to the governing thought need to be developed in detail.

Why the Bottom-Up Approach is Not Preferred

Starting at the bottom introduces several challenges.  First, it's not immediately clear - and might never be - if important details or areas have been missed or under-represented.  Second, items can be bucketed in a variety of ways that might all seem correct, but could be sub-optimal and/or lead to very different governing thoughts.  Finally, there's just a lot more work to be done at the bottom of the tree where there are countless details that can be considered and developed.

One noteworthy exception when the bottom-up approach is often seen as superior to the top-down approach is in Excel modeling.  While a top-down approach to quantitative questions is helpful at the beginning of an engagement or workstream to get a directional sense of what the final answer will be, using that approach with clients and/or a final answer runs the risk of coming across as naive or just plain wrong.  Instead, a bottom-up model is required to confirm and support the final answer.
Posted by Former McKinsey Consultant at 10:13 PM

Former McKinsey Consultant
MBA, former McKinsey management consultant, and alum of several Fortune 500 companies with a passion for coaching and development. I'd like to share what I've learned to (a) help others - especially entrepreneurs, small business owners, and startups - understand business concepts and (b) better cope with the McKinsey (or Bain or BCG) consultants in their lives